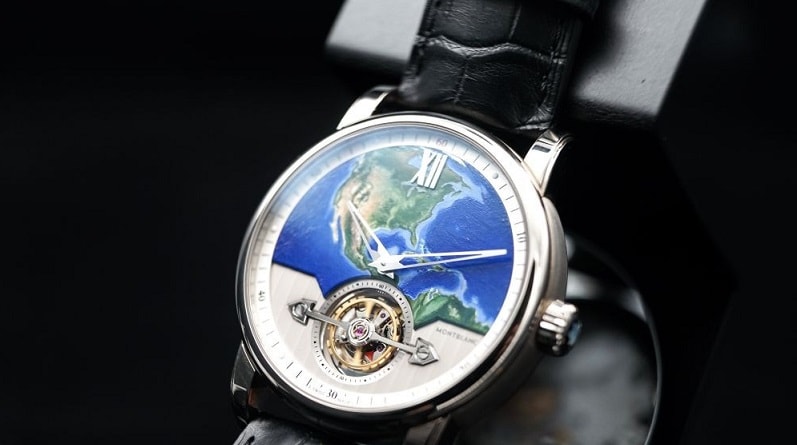 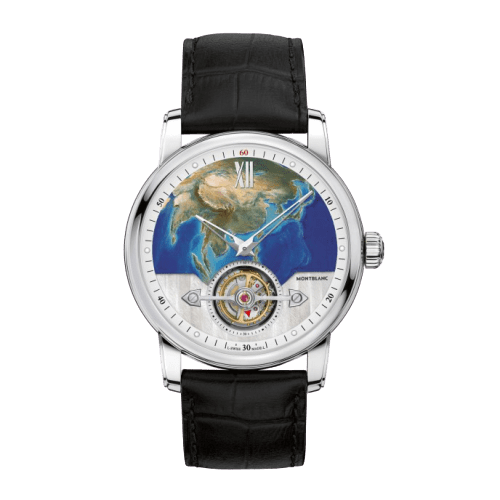 The 4810 is one of the best selling watches in Montblanc’s collection. It is a homage to the golden age of transatlantic travel when Germany crossed the oceans with its powerful cruise ships scurrying for the Blue Riband award for speed. It embodies the German brand’s outstanding watchmaking craftsmanship.

The collection received its name from Europe’s highest peak, the Mont Blanc Mountain, which soars 4,810 metres over the sea level. The Montblanc 4810 ExoTourbillon communicates the idea of travel through the dials of the three models of this watch, which are hand-painted with a map illustrating the continents of North America, Asia and Europe. At the bottom of the map is the ExoTourbillon construction that completes its 60-second rotations doubling up as a small seconds counter. The Asian map version is limited to 38 watches, while the North American and European map timepieces are limited versions of 36 timepieces each.

This refined watch was inspired by the golden age of international commerce and travel. The ExoTourbillon Slim timepiece in the Montblanc 4810 line uses the Manufacture Calibre MB 29.21 while maintaining a vintage-themed and elegant design. The regular ExoTourbillon Slim watch is available in a 42 by 10.14 mm 18k red gold case, while all three limited editions come in an 18k white gold case. The watch is certified by the Montblanc Performance Test 500.

As for the dial, the mutual attribute of the four models is the Côte de Genève stripes on the bottom part of the ExoTourbillon’s face. That space also houses the tourbillon bridge and the window, that is defined with a second chapter ring, through which the original tourbillon can be appreciated. The upper area of the dial of the ‘regular’ ExoTourbillon Slim has a silvery-white dial that is embellished with an obvious Montblanc Star guilloché design. The three limited editions the upper part displays a hand-painted continent; North America, Europe or Asia.

Also, there is a distinct feature; the gauge on the dial that lets you know which setting the crown is on. This gauge is not featured on the three limited editions with the hand-painted dial, as space is filled up with the miniature painting of one of the three continents.

It has a beautiful silvery-white dial with the Montblanc star and a guilloche design on the top dial section. The bottom half features Geneva stripes, which calls the wearer’s attention to the ExoTourbillon at six o’clock. The indices are represented by Roman numerals, printed in red gold, and it is the same for the regate-shaped hands. The watch also has a SuperLumiNova feature that makes it easier to read time in the dark.

The white gold version has a captivating star-themed night dial. The upper part is made of sparkling dark blue aventurine and its lower part shows the classic ExoTourbillon construction against a sophisticated Côtes de Genève motif. On top of the dial is a rhodium-plated “XII” that beautifies the look. There are skeletonised hour and minute hands in the middle; they enhance the elegant look of the timepiece. Meanwhile, the red gold model’s dial has an upper part embellished with a silver guilloché pattern that portrays a notable view of the classic Montblanc Star. The Roman numerals and indexes are red gold-plated, and the number XII set has 18 diamonds.

The Montblanc 4810 ExoTourbillon Slim case is measured at 42mm-wide and has a height of 10.14mm on the wrist. It is made of an 18K 5N red gold case, the same colour as the crown. The three 110th Anniversary Limited Editions models, however, come with an 18K 5N White gold case It is water-resistant up to 50 metres (5 bar) and used a domed sapphire crystal with anti-reflective coating.

The ExoTourbillon Slim uses a 4.5mm-thick automatic movement; driven by the Calibre MB 29.21 which runs at a frequency of 21,600 A/h (3Hz). It consists of 202 components and its power reserve level is 50 hours. The timepiece also has a micro-rotor which is embellished with the Côtes de Genève en Enventail motif. The micro-rotor was designed to display the movement more via the sapphire crystal case back.

The watch operates longer than the particular normal tourbillon constructions with the weight of the ExoTourbillon’s cage being severed from the balance wheel. Greater accuracy and enhanced isochronisms are acquired because of the reduced weight of the cage. The 9.7mm (diameter) balance wheel plays an essential role in the operation of the watch, due to its 18 screws (four of them can be fixed and the other 14 that are stabilised). This further enhances accuracy and gives a conventional watchmaking aesthetic.

Most of the tourbillon timepieces have very flamboyant aesthetics but the 4810 has a slim and improved form that makes for a robust and fashionable dress watch. All its models are matched with a black alligator strap that delivers the precise contrast for the watches.

If you want something dashing and extraordinary but not as loud as most tourbillons, the ExoTourbillon Slim might be an excellent choice for you. Linking the watch together in a grand and neat look is a black alligator strap with a red gold pin buckle.

The gorgeous timepiece hosts a very huge balance. In our opinion, the Montblanc 4810 is one of the best-priced luxury tourbillon watches available at the moment.

Review: Montblanc 4810 ExoTourbillon Slim
Final Thoughts
Montblanc has successfully completed the transition of the 4810 ExoTourbillon collection from something practical, to something a bit more refined and luxurious. The 4810 ExoTourbillon Slim has us nodding in agreement and we believe any true lover of a tourbillon should seriously consider adding this to their collection.
Dial
Case
Wearability
Price
Positives
Perfect movement precision
Brilliantly crafted dial
Light tourbillon cage helps with isochronism
Negatives
The crown position indicator is absent in the three limited editions.
May be better alternatives at price point
Average power reserve
4.4
Editor's Score
Available at
GOLDSMITHS