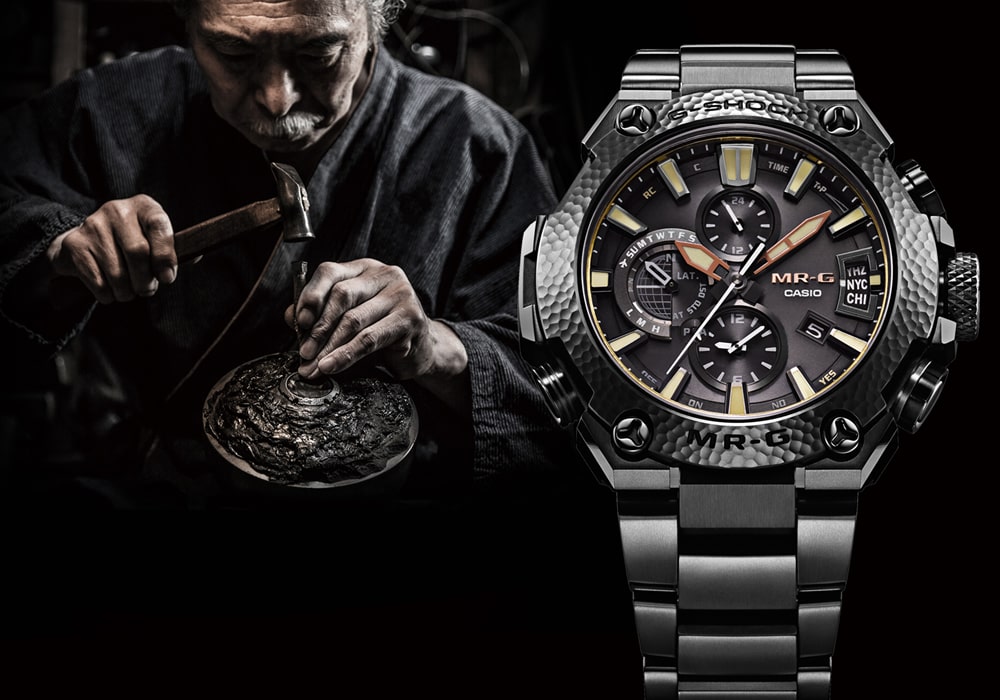 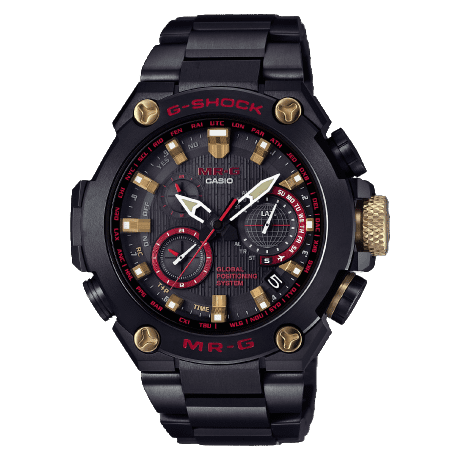 The Casio G-Shock MR-G collection has been around for over ten years, symbolizing the first time that Casio G-Shock aspired to be a high-end product. The intention was to manufacture a metal G-Shock watch – something Casio had said earlier that it would never do. Though vowing that it would only be available in black-coloured steel, they discontinued this colourway and finally emerged with other finishes.

Originally, Casio had presented these deluxe G-Shocks alongside the regular product base back in 1996. Then they birthed the line called the “MR-G”. The model launched between 1996 to 2001. The line took a brief break for some years but made its return in 2003. Finally, in 2015, the MR-G series with which we are more familiar was released.

The G-Shock collection is the first model family that crosses the mind when we talk about shock protection. It has a model put in its sub-product group Hammer Tone series; exclusive edition watches embellished with traditional Japanese rough-surface hammering technique. The model G-Shock MR-G “Hammer Tone” MRG-G2000HA integrates old and modern ideas under the same umbrella. It also draws interest with its price tag which we are not familiar with in the G-Shock line.

The G-Shock – a line among Casio’s most significant product factions – houses the Hammer Tone series, consisting of models designed with Japanese rough-surface hammering technique, for about three years. This traditional method known as “Arashi-Tsuchime” is popularly known for its usage on the hilt guard of Japanese swords, “Tetsu Tsuba” meaning “iron sword guard”. For this model, the renowned metalwork craftsman Bihou Asano was assigned to use the Arashi-Tsuchime technique to the bezel and centre links of the metal bracelet, which would create a finish that looks identical to the prior model at first glance but different when correctly assessed in detail.

The particular colour tone and unique texture patterns used in these parts nod to the traditional Japanese metalworking art. The titanium case and bracelet are arc ion-plated in dark gray. They are motivated by Murasaki-Gane, an alloy with a gold body that amasses a violet patina over time. The process is used after the first handling of the raw metal with Casio’s own “Deep Hardening” procedure that makes the surface five times harder than regular titanium. It yields a deep Gunmetal colour and more resilient abrasion resistance textures. The rich copper tone of the bezel is suaka-themed.

The G-Shock MRG-G2000HA model is not just a handsome face. The watch, like its other variants, is a very highly operative tool. Its advanced timekeeping ability is displayed in the dual-dial world time that shows the time in two distinct time-zones together. It can also change between 39 cities (or time-zones), adding a neat touch to the detail. The cities are signified at the aperture at three o’clock.

The watch utilises Neobrite luminous coated hands and an LED light adding to its practical uses. The sub-dial at nine o’clock is a little interesting. Above the sub-dial is the day of the week, though the task is overworked when the timepiece is on the “travel mode” specified by the plane icon. Below, there is a part with the letters “L, M, and H” – signifying the amount of power left on the watch. A solar-charging system regulates the MR-G collection, sourcing its energy from sunlight. An “L” reading indicates that the timepiece needs some source of light to power the solar battery pack.

The dial and the plethora of tasks might appear slightly aggressive, but you will understand the functions as you spend more time using the watch. No doubt, most owners would not use all of the functions that the G-Shock MR-G-G2000HA model has, but some of the features are somewhat helpful and they can be beneficial when the suitable circumstance happens.

The 49.8mm titanium watch is undoubtedly beautiful. Agreed, everyone cannot comprehend the complications utilized in the pitting techniques, but the timepiece gets a vast amount of compliments on its looks. The robust, rugged case still maintains its wrist presence and is somewhat reminiscent of the Breitling Avenger in aesthetics. Though a little distinct from the conventional products, the MR-G collection is still easily notable as a Casio G-Shock, a very fine one at that.

When it comes to being operative, the MRG-G2000HA has the Connected Engine 3-Way module, which connects with a smartphone to automatically update the watch’s inside data, such as the time, daylight savings time (DST), and differences in time zones.

The G-shock MR-G2000HA collection is prepared with a radio-powered GPS Hybrid Wave Ceptor and tough solar charging system, which converts sunlight, fluorescent lamps and other sources into power. It also has a very handy bluetooth connectivity, allowing it to be considered in the same light as some luxury smart watches such as the Alpina Horological. This enables the timepiece to collect receptions (either automatically when recognized, or manually) for time-calibration, as well as to connect to the App on the mobile phone for extra features. This is a wonderful touch, particularly the former; it keeps the timing on the watch correct and precise – anywhere in the world.

It also has several other functions such as automatic correction of the position of the hands, a chronograph and countdown timer, an alarm function, a calendar that mandates no corrections till 2099, day and date displays, and time display in 39 time zones. Another notable point to mention is the comfortable design of the G-Shock MR-G. Despite being a robust timepiece, when put on it has a relaxed feel. This may be due to the construction of the linked bracelet. The lugs strategically follow the contours of the user’s wrist. On a different level, the bracelet feels very substantial and nicely made too.

The G-Shock MR-G Collection is available in various dial colours and types starting from £2,100 ($2,900/€2,460) The priciest models in this collection are available as limited edition, with the popular purple G-shock Mr-G Gassan model (£6,500 or $8,900/€7,620) with a limited production of 300 worldwide. Inspired by an original kabuto piece, the Shougeki-Maru MR-G model only has 400 pieces available and is also available at £6,500 ($8,900/€7,620), the addition of shock and magnetic resistance make it an attractive proposition for any watch lover.