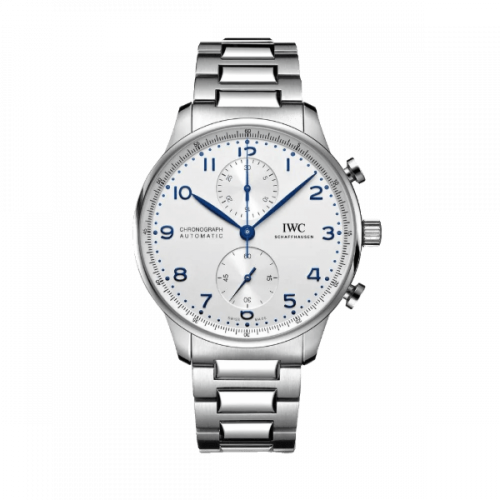 The IWC Portugieser came out in 1939, under reference 325, after two Portuguese businessmen named Rodrigues and Teixeira paid a visit to the IWC company in Schaffhausen with an extraordinary proposal. They requested the accuracy of a marine chronometer in a wristwatch configuration. This request led to the invention of a great, readable stainless steel timepiece featuring a pocket watch movement. It comes with the hand-wound calibre 74, slightly readjusted to evolve into a hunter-movement so the crown could be set on the right side of the case.

From 1939 until 1993, the IWC Portugieser was produced in small quantity. In the 1970s and 1980s, the watch was sold exclusively on the German market and many predicted the reign of IWC’s marine chronometer wristwatch has come to an end. Then in 1993, there was a new change when the IWC Portugieser made its return for the brand’s 125th anniversary with the Jubilee Edition Ref. 5441 – a 42mm watch produced in 1,750 pieces (1,000 in stainless steel, 500 in rose gold, 250 in platinum), which was a tribute to the original Ref. 325; featured a pocket watch-inspired movement named Calibre 9828 (an upgrade of the Calibres 98 and 982).

Yet, a more defining moment that made the IWC Portugieser’s complete come back occurred in 1995. Two remarkable timepieces were launched – the Ref. 5240, a minute repeater produced in 550 pieces (50 in platinum, 250 in rose gold and 250 in yellow gold), with a repeater mechanism fitted on a hand-wound Calibre 95. Even though it was a highly complicated model, this watch retained the classic look of the Portugieser collection. The second watch – IWC Portugieser Chronograph Rattrapante Ref. 3712 (or DoppelChronograph) is considered the most essential introduction and credited as the inspiration for a model made over 25 years later.

In 2018, when the IWC celebrated its 150th anniversary, the brand launched some memorial editions. Among them was the Portugieser Chronograph Edition 150 Years ref. 3716, very similar to the ref. 3714 but motorised by the in-house cal. 69355. Now the Portugieser Chronograph 3716 has adequately been added to the collection as a non-exclusive model, substituting the revered ref. 3714.

The watch’s design is modest but stunningly diverse. The dial is characterised by Arabic numerals, dot minute track, and a great but proportional design. The watch sports an exquisite bezel, one that is almost not there at all. It is a slim bezel, which gives it an unmistakable and alluring look that is also distinct. It has evolved from a time-only watch in the original into a chronograph, and even perpetual calendars and tourbillons.

The watch is adorned with Arabic hour numerals. In the steel models, the applied numbers are brass, but on the 18kt gold model, the numbers are also solid gold. The dial has three subdials: one for the hour counter at 9 o’clock, one for the minute counter at 12 o’clock and one for the small seconds at 6 o’clock.

The dials are stylish – available in funky new colours. The line up consists of nine references, in either steel or 18k red gold, with the timeless classic in steel with gold numerals that are the Portugieser Chronograph. The line up also features many stunning new colours for the steel model, specifically metallic green, burgundy, or blue. The green and burgundy are not the conventional Portugieser looks, but that makes the colours thrilling. The gold-on-silver dial is classic, but it has been made for so long that the look has become too familiar.

The IWC Portugieser Chronograph has always been a slim watch. The chronograph measures 41 mm in diameter and only 13.1 mm in height. The height is just a bit larger than the older closed-case model, to contain the sapphire crystal.

The polished case band makes a great contrast with the brushed bezel and transparent case back. The case back is held down with four screws. The watch provides 3bar water-resistance (can also be seen as an engraving element on the case back).

The crown and pushers are well combined into the 41 mm steel or gold case. The polished pushers have an excellent and reliable response. The IWC particular crown is adorned with an ingrained IWC logo much like the IWC Ingenieur.

The IWC Portugieser Chronograph is powered by the in-house Calibre 69533 movement which belongs to the IWC’s 69000 family. Movements from the 69000-calibre family are installed in all IWC watches that demand an accurate, significant and high-performance chronograph movement. The chronograph is a classic column-wheel layout. Its energy is supplied from a bidirectional pawl-winding system similar to the Pellaton mechanism. The chronograph mechanism – column wheel – is somewhat transparent too. It is not hard to see the hand-made perlage, round Cotes de Geneve and the brushing.

It has a 46-hours power reserve, with a frequency of 28,800 vph / 4 Hz escapement, and they can be seen via the skeletonised rotor weight and the window of the top bridge. The automatic self-winding movement has 194 components and 27 jewels.

The watch is secured to the wrist by an alligator strap. It comes with a thin and small triple folding deployant buckle. There is also a bracelet option – it is a beautiful yet sporty chronograph and versatile. The H-shaped bracelet is elegantly completed with brushed and satin-finished surfaces. The butterfly folding clasp enhances the comfort of the wearer

It is good to know the ref. 3716 is a decent value recommendation. It is priced at less than 5% over the original (ref. 3714), a modest and entirely moderate increase. The ref. 3716 offers much better value than the original, which, after several price hikes over twenty years, became a bit expensive for a 7750-based timepiece.